re In my last post Rajasthan Safari(Jaipur-I) i present a glimplse of Jaipur and its facts with a brief of on its culture,places of tourism interests,festivals and the best time to visit.This post will feature details of major tourist places,festivals and it colourful bazaars(Markets). 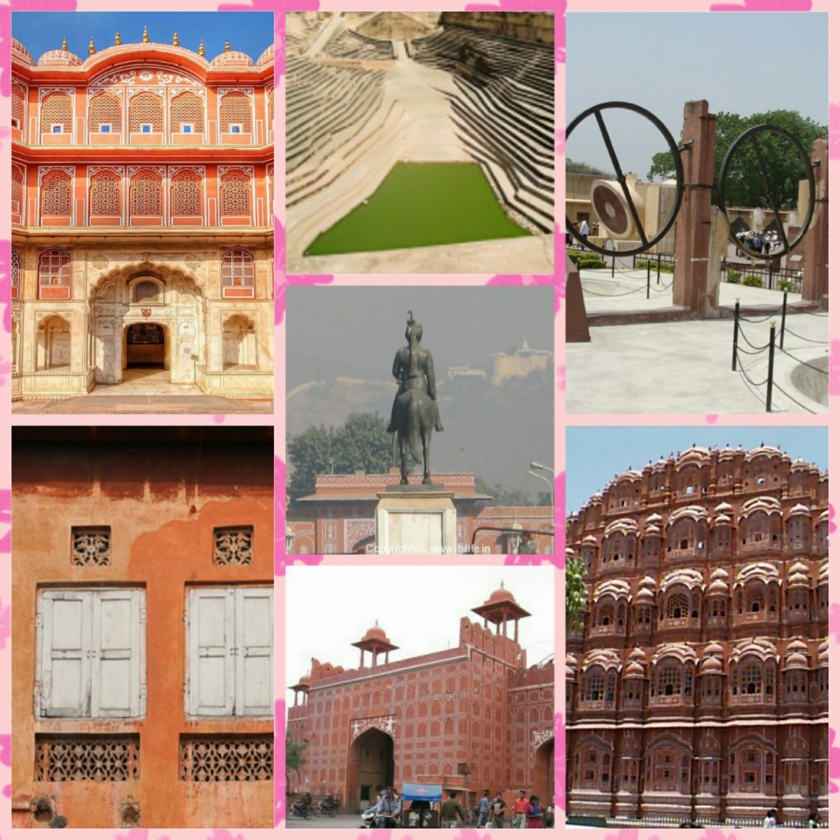 “Jaipur”the capital of Rajastan and well known as “Pink City” is famous for its royal hospitality,cultures,festivity & charming architecture of forts & palaces constructed with sandstones although most of the tourist attraction places are situated at “Old City” and this walled area of the city is popularly called as The Pink city among the locals.

Spreads over several acres of land The City Palace is situated in the centre of heart of Pink City holding the majestic glorious history of Rajputs in every nook and corner of numerous edifices,gardens & colossal courtyards.It was constructed during the rule of Maharaja Sawai Jai Singh II(1699-1744) and it took three years(1729-1732) to be completed.It reflects a blend of Mughal,European & indian culture in its architecture. 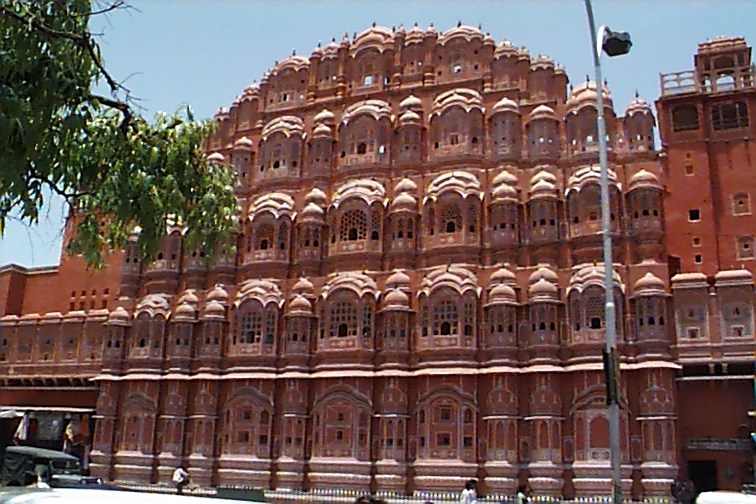 Whenever someone talks about Pink city,most of the times its image of Hawa Mahal strikes first in front of eyes.Hawa Mahal well known as Palace of  the Winds constructed during the reign of Maharaja Sawai Pratap Singh in 1799 and Lal chand Ustad was the  architect behind this beautiful structure and the most fascinating fact behind this crown shaped structure is that it is a building without any foundation.It is situated next to The City Palace this five storey remarkable pink sandstone pyramid shaped structure has 953 windows meant for the purdah clads or royal ladies to facilitate them with the view of city as it is based in the heart of the old city that one can cherish beautiful views of bazaars,the palace & jantar mantar from here.

Amber(spell as Amer) once was the capital of the state and one of the most popular fort among others in Rajasthan,a must visit sight in Jaipur itinerary.This majestic fort located on picturesque rugged hills of aravalis  is a blend of Mughal and Rajput architecture,built in 1592 by Raja Man Singh.The Fort was built in red sandstone and white marble.The fort has breathtaking view of Maota lake in its frontground and prominent structures such as Diwan-E-Aam(Public hall),the Ganesh Pole, Jai Mandir(Victory Temple), Splendorous Sheesh Mahal(Hall of Mirrors) leads you awestruck from its art & aura of architectural work wheras Sukh Niwas Palace is a live example of creating air conditioning effect from naturally flowing water then the map of fort in shape of sprawling garden,the walls of the palace expressing paintings formed with elegant work of carving on precious stones and mirrors is beyond explanation of words.Visitors have the option of enjoying the elephant ride up the ramps and into the fort through Surajpole gate that opens into the courtyard known as Jaleb Chowk.

For best experience of history,culture,traditions and heritage of place attend the dazzling light & sound show with backdrop of Amber fort,one of the fascinating attraction of Amber fort.The narration of fort’s saga is itself in legendary voice of Amitabh Bachchan.

This is another giant fort situated near to Amber Fort on high point of pictureque aravalis known as “Cheel ka Teela”built by Maharaja Sawai Jai Singh in 1726 also known as Victory Fort.It was used to store arms & ammunition and one of the main canon foundery of that era since it was located on the high altitude the entire jaipur city can be seen from this fort and one of the world’s largest canon on the wheels”Jaibaan”weighing over 50 tons kept here.

This huge fort is made up of red sandstone and apart from its armory importance the highlight of the fort is its rain water harvesting system,there are three water tanks in which water collects strategically from the canals in hills.The fort complex is divided into an armory,canon foundry,reservoirs,vintage temples,mueseum and rest houses of the for the members of royal family(Aram Mandir,Laxmi Vilas,Lalit Mandir & Vilas Mandir) .One can view beautiful landscapes around the place with adjoining amber fort from the centre of the watch tower.Its is said that there is secret subterranean passage that connects Jaigarh Fort to Amber Fort serves as emergency escape during wars.

Amber Fort was used as residential and Jaigarh Fort was meant for the protection purpose of royal families whereas Nahargarh was used for hunting of the game or for recretion of royal families and also known as “Hunting Fort”.Stand tall amidst the rugged aravalis,it is one of the most popular fort of Pink City built by Maharaja Sawai Jai Singh II in 1734.Most of the structure of fort is in ruin state though Madhvendra Bhawan,a two storey structure has of 9 residences for 9 queens known as “Zenana” reflects the rajputana art and culture through carvings & paintings on the ceilings & walls.Another attraction of the fort is Nahargarh biological park with presence of lions & leopards.The baawdi(reservoir) located in front of entrance is very popular among the youth due to its picturisation in the movies and you can also find a restaurant here in this fort resembling recreation purpose of fort.

The most serene structure stands proudly amidst the chaos of the city in the middle of sparkling blue man made lake (Man Sagar Lake) is alluring Jal Mahal or The Water Palace.It was constructed by Maharaja Madho Singh for his duck hunting only then earlier in 18th century Maharaja Madho Singh II enhanced the palace further. This five storey edifice was constructed from pink sandstone and reflects a fusion of mughal & rajput architure from its built.Most of the tourists visit here during thier way to Amber Fort as it falls in middle of the way and a visit here will take 30 minutes maximum. 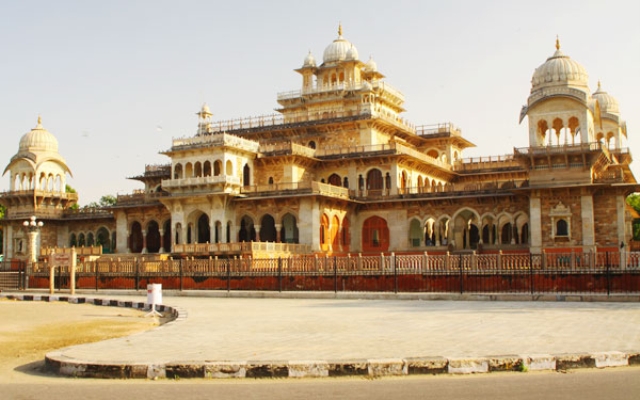 The story of Pink colour of pink city and Albert Hall is linked together as this beautiful Indo-Saracenic structure was built by Maharaja Ram Singh to ensure the visit of Prince Albert of Britain during his visit to India in 1876 and the city was coloured pink reflecting traditional warm welcome to him.The Mueseum is named in honour of Prince Albert and located next to Ram Niwas garden in Jaipur.The museum exhibits a rare collection of ancient stuffs from Jaipur’s royalty stuffs including miniature paintings,artifacts,carpets & woodcrafts. 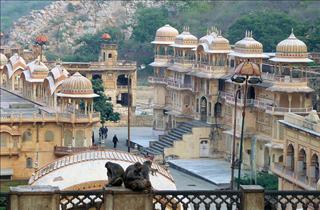 Galtaji is a temple complex situated amidst utter surroundings near to beautiful Sisodia Rani Ka Bagh is getting popular as tourists attraction of the city and popularly known as The Monkey Temple due to the large number of presence of monleys here.The highlight of the temple is is its natural is its natural spring that fills seven large pools,pilgrims used to come here and took a dip in water to get rid over from sins and the sunset point at sun temple,a part of temple complex.

There are few more other attractions of the city namely The Birla Temple,Rajmandir Cinema,Kanak Vrindavan and Ishwari laat.If time permits do visit to these attractions also. 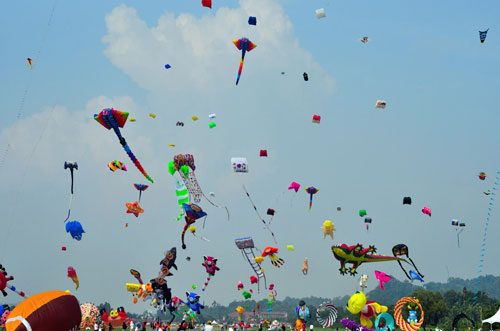 Every year on the auspicious eve of Makar Sakranti(14th January) Jaipur celebrates Kite Festival and paint the canvas of sky with colorful kites.Kite flying competitions are organize everywhere in Jaipur on this particular day.State govt organize International Kite Festival wherein people from various parts of world actively participate and enhance the charm of this auspicious day.

Gangaur festival is celebrated in reverence to Lord Shiva and Goddess Parvati as the words ‘Gan’ stands for Lord Shiva and ‘Gauri’ for Goddess Parvati.The festival centres around women and all the rituals to be followed are observed by them.The festival rituals commence the day after Holi.The festival celebrates the union of Shiva and Parvati which gives young girls and boys an occasion to interact with each other. It is an elaborate occasion and there are several rituals associated with it.During this festival in Jaipur, a popular sweet dish called ‘Ghewar’ is distributed between families, relatives and friends. 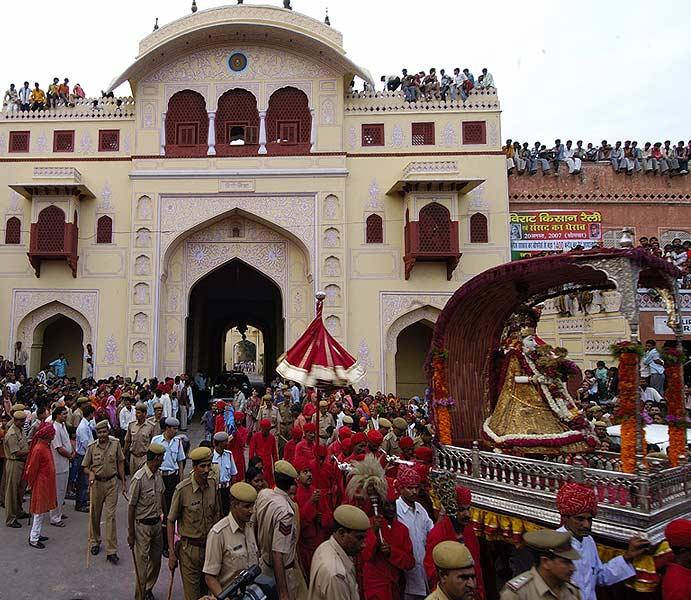 Teej celebrates the arrival of the monsoon after hot summers. The festival is a three day celebration which includes both rigid fasting and scrumptious feasting.This festival is dedicated to Goddess Parvati and celebrates her return to Lord Shiva.Colourful fairs are the prime highlights of the festival, which are frequented by women, both married and unmarried who are dressed in colorful clothes and jewellery. The fairs comprises of swings,singing, dancing, devotional music,mehandi design competitions and performances by folk artists.

Holi is more colourful for visitors with the celebrations of elephant festival.The festival begins with the procession of royal elephants painted with numerous patterns and designs,decorated with beautiful clothing,adorned with jewelries and anklets with ringing bells.Elephant polo,Tug of war,Elephant race,Sprinkle of colourful water on visitors and Gaj Sringar Exhibition are the attractions of festival.

Jaipur is a vibrant and beautiful city, filled with bazaars and a trip without shopping here is incomplete when it is known for its handicrafts,jewelries & gems,quilts,fabrics. Bapu Bazaar,M I Road,Johari Bazaar,Badi Choupar,Choti Choupar & Kishanpole Bazaar are some main markets and all these are situated in old city.

Ghewar a deep fried sweet dish,mostly available during festivals such as Gangaur and Teej. It comes in varieties such as plain & mawa.Recommended to try at Rawat sweets,near bus stand & LMB,Johari bazaar.

so these are few of delicacies you should try out here whereas there are few more traditional dishes left that i will share in other cities of Rajasthan.

How to Reach Jaipur

By Air: The Jaipur Airport is situated at Sanganer and it connects the city to all the major parts of India as well as some of the major overseas countries.

By Train: Jaipur is well connected to almost every part of India through the means of Indian Railways. There are several trains which connect this city to all major metro cities.

By Road: Jaipur, the pink city is linked with the all the major cities of India through the network of National Highways 8, 11 and 12 to name a few. There’s also a very good bus service between Jaipur and Delhi provided by Rajasthan State Road Transport Corporation and it is well linked with Agra.

Next post of this series will take you to holy cities of Ajmer & Pushkar.

🔭A hotel sales professional, food & travel lover, published travel & leisure writer. Chef Gordon Ramsay & Chef Ranveer Brar are favourites. I love to read indian authors, Nikita Singh the most favourite with John Green & Nicholas Sparks are my kinds of reads. I hope you will enjoy visiting my blog. Open for suggestions & advices. *****This is an AWARD FREE BLOG, your love towards my writing would be my reward so your feedbacks & suggestions are always valuable for me***** Have a great day & smile a lot😊 View all posts by Prashantt 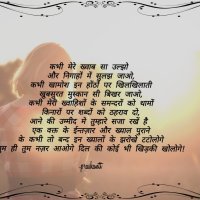 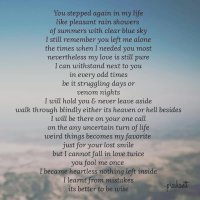 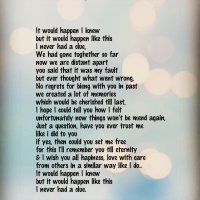 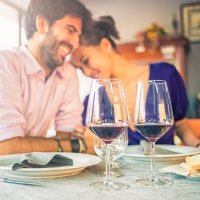